Caroline Wildi is an actress and teacher born in rural East Sussex, based in London. 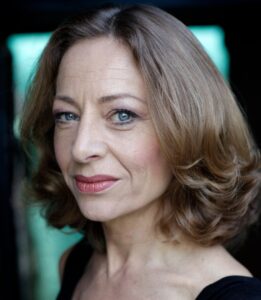 Caroline has worked extensively as an actress in Film, Television and Theatre since graduating from Mountview Academy in the early 80’s.
She has adapted for Stage and Film, and is an experienced Voice over artist: specialising in Drama, Narration and VR for Games.Caroline’s voice work includes the Classic Series; Agatha Christie’s: 1, 2 Buckle My Shoe and Taken at The Flood (Radio 4 Extra) and voicing Brian Eno’s spoken word album “Drums Between the Bells”.Caroline’s Theatre credits include seasons at the National Theatre (Fathers and Sons, Ting Tang Mine) and RSC ( Romeo and Juliet, Much Ado About Nothing). She has toured in the UK , Europe and USA and has been privileged to perform in many of our magnificent Regional Theatres.
Other credits include Mansfield Park (Chichester Festival) The Admirable Crichton (Haymarket Th ) Noises Off( Old Vic) The Cherry Orchard ( Union Theatre) The Passing of the Third Floor Back (FinboroughTheatre), New work includes Breathless (Albany Empire) The Dice House (Coventry) That Face (Landor), and Paper Dolls (Kiln Theatre.) Caroline was Mrs Burling in An Inspector Calls (UK National Tour)Carolines started her career as a regular in Brookside. Since then she has appeared in many series including The Bill, Eastenders, one-off dramas such as The Marchioness, 40, and If I Had You.Caroline is the female Inferi in Harry Potter and The Half Blood Prince. Other film credits include Deux Freres (Jean-Jacques Annaud), The Night of a 1000 Eyes (Sandra Goldbacher) She has appeared in numerous shorts, most recently Dad Joke, The Bris and Full English for which she earned several nominations and won Best Actress at the London Independent Film Festival and WOFFF.