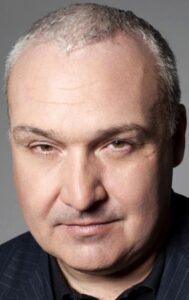 Frank Harper is an English actor and director, film producer. He is best known for his "hard man" roles, such as Billy Bright in The Football Factory (2004) and Dog in Lock, Stock and Two Smoking Barrels (1998).

Frank Harper had an early interest in acting and appeared in a play based around football supporters, at the Albany Theatre in Deptford, while he was still at school. He appeared as a white nationalist in South West 9, and as the bank robber in Harry Enfield's film Kevin & Perry Go Large. He was featured in The Streets' music video "Fit but You Know It", and cast as real-life villain Jack Whomes in Rise of the Foot Soldier.

During his career, Harper has appeared on many British TV shows including The Bill, Doctors, Lovejoy and Waking the Dead. He also wrote, directed and starred in the 2012 British film St George's Day.