ACTING AND IMPROVISATION FOR SCREEN


Performing without a script can be liberating for some. For others it can be scary largely because we fear “failure”.

As children we play freely without a script, without self critique, without worrying whether we are being funny, clever or original enough.
As we mature our creative ability to play spontaneously gets forfeited to our inner critic who sits in judgement censoring and editing our impulses.

This 2 day workshop is suitable for those with no experience of improvisation and also for those who may seek to expand theirs further. The course will be designed to build connection with our authentic selves and others and to have as much fun as possible in the process. 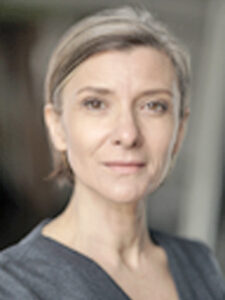 Mandana is a native Londoner with Welsh/Persian heritage.

Trained at The Drama Centre which draws heavily from Stanislavsky and Method Acting.

She built a strong foundation in Classical acting while touring extensively with Compass Theatre and The English Shakespeare Company and later at The National Theatre.

Her first introduction to screen acting was via 3 and a half years spent on the soap opera “London Bridge “ which also happened to be the first ever production filmed at 3 Mills Studios which at the time was still a Dairy Depot (replete with an endless stream of Delivery Milkmen on their floats)!

She then filmed the infamous Bad Girls Series 1-3 ( bizarrely in an adjacent studio also in 3 Mills).

Mandana has enjoyed teaching at ISSA since September 2017 sharing the Improvisation for Screen Module with Tutor Mary Roscoe who she first worked with on her first ever job 30 years ago. The collaboration provides students with a uniquely enriching and creative environment in which to explore themselves, their own stories and their capacity to create new ones.