Master the victorian art of hack and slash with the straight razor, beloved murder tool of Sweeney Todd!

This is a unique opportunity to study the straight razor techniques in relation to fighting on screen for film and TV. Screen Combat is rapidly becoming a staple Skill for today’s industry with series such as Vikings, Game of Thrones, Beowulf and Britannia, and Films such as Thor, Captain America, Dunkirk and 300 requiring greater involvement from actors within fight and action scenes.

This course will be led by Sam Kahn with a variety of industry professional Instructors, fight directors and fight captains.

This course is physically demanding, so a certain level of physical fitness/ability is desired. We can adapt classes and techniques if you have specific physical requirements, please contact us before booking so that we can make any necessary preparations. 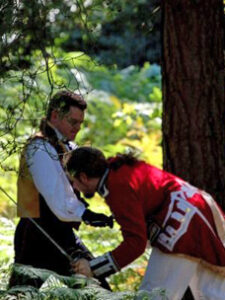 am Kahn is a Director, Fight Director and Choreographer, and is a Certified Teacher with the British Academy of Stage and Screen Combat.

He has Designed and Directed Fights with a Large Variety of Weapons, from Historical Beatings to Fights of Fantasy.

Following his Qualification with the BASSC, he has continued to instruct Students in the arts of Staged Violence, teaching courses that result in an Industry Recognised Qualification

Current Projects include a 19th Century Prize Fighting Short, Designing the Fighting for Film Performance Test, Directing with the Group ‘Impact’- a Fight Unit for Film, Theatre and Television and working on his Sixth Feature.

Sam works closely with Actors and Directors to ensure that they get the most out of fight scenes that they can. He also works with other Departments- Lighting, Sound, Costume and Make-up to ensure that Action Scenes are consistent with the rest of the Production

As regards Teaching, Sam has worked with many different educational organisations. His continued work with the International School of Screen Acting allows him to continually develop the Syllabus and Systems which he uses to teach Fighting for Stage and Screen, either for Serious Drama Students or for Groups looking for Fun Workshops.